Teens Mural at the Park

REACH-ing into Parks With Art!

R.E.A.C.H. San Benito Parks Foundation, Arts in the Parks Project received a matching grant from Community Foundation in 2017, to create interactive and stationary art with ‘at risk’ juveniles from the county Juvenile Probation Department. The project included creating art at the San Benito County Historical Park. Joel Esqueda was contracted to work with the children because of his unique experience with youth in the arts.

The children were involved in creating a mural at the park from conceptualization to completion. The large-scale mural depicts the rich cultural and diverse history of San Benito County. The children were also involved in creating signage that promotes parent and child interaction. This signage has been displayed around the playground and throughout the park. The children also created original canvas art pieces that are displayed in the Dance Hall at the San Benito County Historical Park. 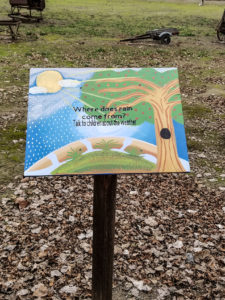 The San Benito County Probation Department and local artist Joel Esqueda gave these children the opportunity to engage in a positive activity. The probationary kids are usually at the park year round, pulling weeds and performing park maintenance. With the Community Foundation matching grant, REACH was able to implement involving them in this creative project, working with a professional artist as teacher and mentor. It doesn’t get much better than planning, starting, doing and finishing a public piece of art, as they did. They and their parents will remember this for a long time.

Thanks to Community Foundation for San Benito County, the project began in May, 2017, and was completed in late 2017, with the very valued donations of Hollister Paint Company, Kelly Moore Paints, McKinnon Lumber Company, and Anita Kane, Landscape Architect.  Caretaker Don Pidd of the Historical Park facilitated the project with his usual patient, kind manner.  When you visit the San Benito County Historical Park, you’ll no doubt enjoy the refreshing images meant to stimulate conversation with your children and friends.

Valerie Egland and the Board of Directors